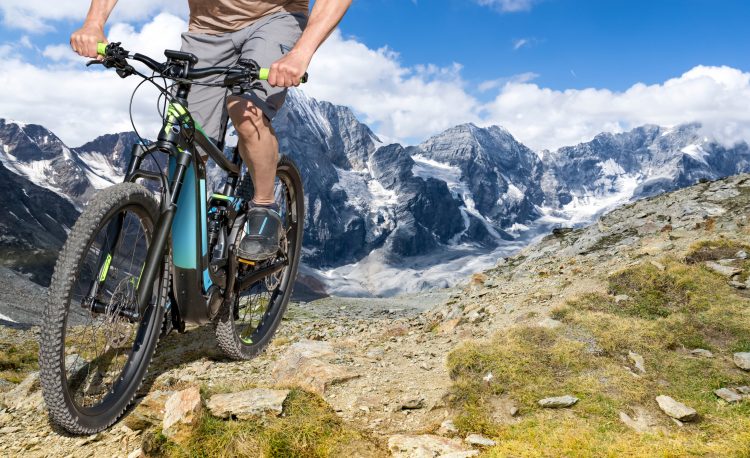 With improved Lithium-ion technology and plummeting battery prices, a tough, powerful electric bike is not so unimaginable. But where do you draw the line and cross over into the electric moped realm – the lines are blurry. Do just a bit of research, and you’ll find that some of the fiercest ebikes have been crafted in people’s garages and not in factories. But, if you don’t have the time and energy to craft your own, here are four powerful eBikes that will make your next adventure thrilling.

Rambo bills itself as a superior ebike focusing solely on mountain bikes. Although they operate in the niche of electric hunting bikes, these eBikes are appealing to anyone looking for a bit more power than a city ebike. You’ll immediately notice the super fat, rugged all-terrain tires with a sizable battery pack to match. The idea is for the bike to stay the course through an average hunt while being as silent as possible. However, Rambo is careful not to let camo drip onto the frame, maintaining their appeal to a broader audience.

The eBikes top out at a whopping $8000, with their flagship “The Venom.” This thing has 14 gears, coupled with a 48 V 17 AH battery and a solid kilowatt motor! It is exactly what you want beside yourself when you head into the unknown and happen upon a cougar. The Venom comes with Maxxis Minion tires, measuring 26″ x 4.8″ (that’s very fat tires). That kind of tread can take you up a mountain, and the four-piston hydraulic brake system can easily hold you on the slopes.

Rambo’s careful attention to detail makes it one of the best. For instance, the batteries are frame integrated and sit much lower than normal to keep your center of gravity lower. A lower center of gravity not only gives you additional stability but a more responsive ride too. Before you fret, Rambo batteries are universal. This means you can swap the standard battery for the insane 17 AH battery that would give you a range of 40 miles. Meanwhile, the motor on Rambo’s ebikes comes with a peak rating of 1500 W and is easy to maintain.

But, it’s important to keep in mind that there’s a cost to all these special features. For instance, with that much power at the push of a button, would you even want to ‘ride’ the bike when you’ve run out of juice? The weight of all the heavy accessories is surely not going to help.

Where Rambo clings to its hunting theme, Recon clings to the military and law enforcement motif. Recon bikes are like mountain bikes on steroids, which has helped Recon build a business out of power bikes.

Not only do Recon bikes have power, but the company also stands behind its products. Their bikes have a lifetime warranty on the heavy-duty aluminum frame. The battery is again integrated, providing greater stability and responsiveness because the weight is lower. Like Rambo, Recon gives you a high voltage motor up to 1 kW. But, Recon’s range appears to be about 25% higher than at Rambo, at 50 miles.

When you think of tough ebikes, you often think of adventure and off-roading. Curiously, Recon is all about urban corridors, city traffic, commuting, etc. Perhaps that’s why top speed is important to the maker, at 30 mph. Thankfully, you are not lugging massive tires over city roads. Instead, you’ll have Recon’s four-inch Kshield molded tires, which likely contribute to the higher range.

Maintaining its appeal to the 9-to-5 crowd, Recon provides reliable Samsung batteries and is upfront about costs to replace them ($450 that you may not have wanted to spend). You also get to choose between Shimano or SRAM gears, and the brakes are again disk-hydraulic. The bike’s metallic front and rear fenders also help give Recon’s bike a “city” feel. This urban look is completed with a smart color LCD that looks attractive and is waterproof, contributing to the ticket price of the bike.

You also get a solid heavy-duty rack in the back that can carry over 50 pounds. Though the Velo plush seat would feel more comfortable, in contrast. We recommend going with Recon if you’re a part city, part Mountain creature, as the four-inch tires are still serious business. As always, there are mellowed-down offerings within their range to suit a variety of customers if you’re just looking to stick to city streets.

Juiced takes its name seriously, and you should bank on getting a faster bike with a very long range. Don’t be fooled if a couple of their models look no different than electric mopeds. Juiced gives you everything you want in an ebike in an easy, no-nonsense way. That may be why their prices appear to be too low, maxing out around the $3000 range.

If you’re looking for a powerfully fast bike, check out the HyperScorpion Express with speeds over 30MPH and a solid 70+ mile range!

Remember the batteries on Rambo and Recon? Juiced packs 52 V batteries, with 19.2 AH as standard. The motor is a kilowatt, though you could go with a different model with a slightly reduced wattage for extra range. As for tires, they max out around the 4-inch mark. Juiced is also upfront about the weight: you’re looking at 80 to 100 pounds. In other words, power bikes are not what you carry up and down the elevator or everywhere else in your arms.

In general, this manufacturer treats its ebikes as akin to mopeds. The headlight intensity is greatly touted, as are integrated LED taillights (the brake light function sets them apart even more). Most models also feature hydraulic lockout in most models. Likewise, the brakes are hydraulic as well.

One unique feature of Juiced bikes is that there is also a USB port, allowing your phone to share in the juice. The bikes are definitely very well provisioned, and you will again find the Shimano gears. Still, it may be a bit hard to belong to if brand-name is important to you. You see, Juiced appears to be doing everything and appears to be very good at it all. For every nerdy model, there is a matching hipster rad version. They are all super powerful. Just take your pick.

Welcome back to the world of sane prices with Cyrusher bikes. These bikes focus on cool and clean power, and while they are powerful are commonly used for commuting. That may be why we are seeing a motorcycle-style frame in the flagship for this maker.

The range is pretty serious at 62+ miles, but these are not city bikes exclusively. You could take a Cyrusher and crush the mountaintop over a weekend. There’s certainly the capability, even if the bikes don’t look like so many others in the mix. If anything, they are colorful and sporty, but of course, pack a punch.

However, you don’t have too many models to choose from. The one with the highest ticket price of the six models somehow looks just as colorful and trendy as the rest, just that it can take you 62 miles in one charge. That may have to do with the slightly smaller 750 W motor. This is likely more than sufficient for most people and purposes. The battery is removable in this case but still rings at 48 Volts and 17 AHs and is again a Samsung. The good news is that you can recharge it in five to seven hours.

The tires max out at 4 inches, also helping with the range. You’ll also get a spring in the back while the front is still an air fork. These features may have to do with the bikes being comfort-oriented. The brakes are full-hydraulic. Another unique thing about a Cyrusher bike is that it is entirely programmable, like a modern rowing machine or an elliptical.

While the bikes are up to 90% preassembled, you do get a few cool extras, such as the dual-sided aluminum transit crankset to protect your chainstay. The gearbox is again Shimano, but the 21-speed freewheel bundled appears to be a bit excessive (although it looks every bit as cool as everything else on your bike).

Cyrusher deserves kudos for keeping the ebike from turning into a moped. Instead, it looks like a modern work of art with the decal, graphics, and brightly colored paintwork all intact.

Deciding Which eBike to Get

An ebike from any of these four companies would be a solid choice without a doubt. But every product has a different appeal, and what you are looking for will determine which one is best for you. For serious off-road adventures, the Rambo is your best option. However, if you’re simply looking for a boost of power for your daily commute, seriously consider Recon, Juiced, or Cyrusher ebikes.