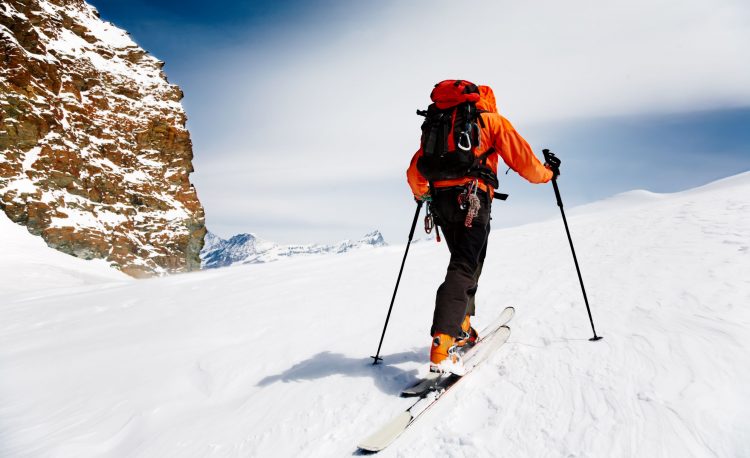 What is Ski Touring?

Ski Touring sometimes goes by the name of backcountry skiing or snowboarding. This refers to skiing on unmarked and unpatrolled runs typically outside of a ski resort. The biggest difference between ski touring and backcountry skiing is that ski touring doesn’t incorporate a gondola, lift, or any other form of transport.

Ski touring can be single-day or even multi-day adventures. There are plenty of companies that you can book tours with that will also make sure you know what you’re doing before going out in your own group.

Where are the Best Places to Go Ski Touring?

Ski touring can be found all over the world. The terrain can include mountains, glaciers, and even volcanoes. Some of the best and most popular places to visit are:

In Iceland check out the Troll Peninsula, Glacial Fjords, and/or the East Fjords. You can also explore Hvannadalshnukur, Iceland’s highest peak.

Norway has many options for most levels of skiers and snowboarders. There are dozens of places in Norway to ski tour including Sogndal, Stranda, Orsta, Andalsnes, Lyngen, Narvik, Lofoten, Vesteralen, Senja, Gudbrandsdalen Valley, and the Jotunheimen Mountains. Other ski touring destinations include Hemsedal and the Rondane Mountains.

The Sharr Mountain range is the place to go ski touring if you are in Kosovo, Albania, or North Macedonia. The mountains run through all three countries. You can also go to Korab Peak, Radomire, Prevaila, Kleq Peak, The Balkans, The Accursed Mountains, Montenegro, Bakrdan, Small Turk, Kobilica, and Ljuboten mountain.

New Zealand is an incredible country that offers a lot in Ski Touring. You can go to Arthur’s Pass National Park, Central Otago, Fiordland, Aoraki-Mount Cook National Park, Mount Ruapehu, Nelson, Ohau, Wanaka, and the Arrowsmith Range, all on the South Island.

Japan gets some of the most amazing snow in the world and this has some of the best ski touring. You can explore Niseko, Kiroro, Asahidake, Hakkoda, and Nozawa Onsen.

Russia is another place where ski touring is growing in popularity. You can explore the Elbrus Region, Mamay, Luzhba, Sheregesh, Khibiny Mountains, Krasnaya Polyana, Kamchatka, Lago-Naki Plateau, Arkhyz, and Dombay.

What are the Dangers of Ski Touring?

There are plenty of real dangers when ski touring and while some things are preventable and avoidable, there is still a risk. Some of the biggest dangers are:

What Gear Do You Need to Go Ski Touring?

Many of the dangers associated with Ski Touring can be minimized by packing, having, and knowing how to use the proper gear. While it’s dependent on how long you plan to be, there is some essential gear to use and have. It’s also important to actually know how to use your gear, so spend time practicing with them before heading out into the backcountry.

How Else Can I Prepare for Ski Touring?

Being prepared for anything that can go wrong is your best way to minimize risk and maximize your experience. There are various ways to prepare for a ski touring trip, especially if you’re a beginner. Some of the most important are: