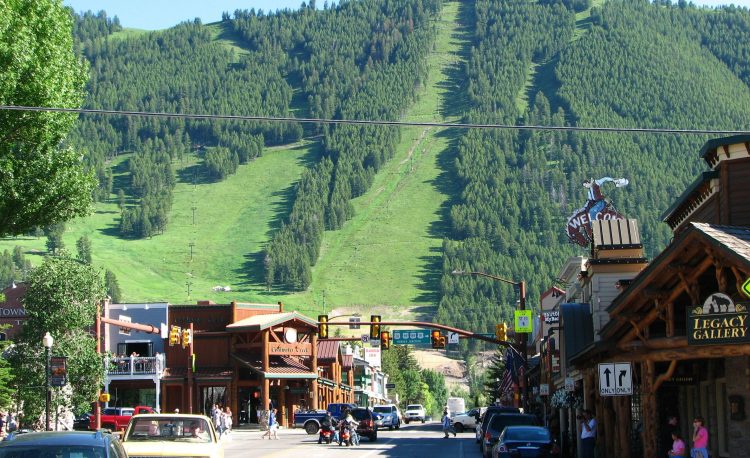 There’s perhaps no place with a better mix of gnarly terrain, amazing nightlife, and laid-back vibe than Jackson Hole, Wyoming. While the Grand Tetons lend their mind-boggling beauty to Jackson, mother nature provides it with an exorbitant amount of snow, making it a mecca for skiers, riders, and a host of other extreme athletes. And the town is growing, which means there are plenty of options for those who’d like to work a dream job in between powder laps at Rendezvous Bowl. Below, we’re giving you a rundown on some of the most coveted jobs in Jackson Hole, and some tips on how to land them — because (I assume) there’s nothing better than hucking Corbet’s Couloir before clocking in every day.

We have other resort jobs further down the list, but we thought this one deserved its own spot. Jackson Hole is widely considered one of the most — if not the most — difficult ski resorts in North America; so the red and black jackets of the ski patrol are something of a badge of honor around town. As a member of the JH ski patrol, you’ll be responsible for ensuring guest safety by opening and closing terrain, helping with avalanche mitigation (yes, you could end up using explosives), ushering skiers and riders down the mountain, and performing a wide array of other duties. First, though, you’ll need training: many Jackson Hole Ski Patrol members have attended the National Avalanche School, and all of them are members of the National Ski Patrol. In addition to tons of medical and safety knowledge, you’ll obviously also have to be able to ski any kind of terrain in all kinds of weather.

You could do a lot worse than working for the brand responsible for some of the raddest ski movies in the business over the past twenty-plus years, including Almost Ablaze, Make Believe, and Paradise Waits. Teton Gravity Research’s studios are in Jackson, and the production company lists several open jobs, including an operations associate role for their epic tours, a post production supervisor, and editorial and social media internships. It will help to have prior experience with a production company, proficiency with editing suites, and/or a passion for videography and outdoor sports. If you’re a filmmaker, outdoor athlete, or just a ski movie buff, working with TGR might be the best job you ever have.

Look, it’s no secret that Jackson isn’t exactly cheap. And almost no one benefits more from the steep and seemingly ever-rising home values than realtors. To get started in real estate in Jackson Hole, you’ll have to become a licensed real estate broker in Wyoming. Depending on whether you have prior experience in another state or are new to the industry, this can be a lengthy process, involving several tests and employment with a broker. In a town like Jackson Hole, these careers are going to be extremely competitive, so be sure you’re differentiating yourself and staying patient. If you do, you could eventually see some big commissions — even a small percentage of a several-million-dollar home is a hefty chunk of change.

You could do a lot worse than working behind the bar at Figs, inside the Hotel Jackson, or The Handle Bar at the Four Seasons. Particularly if you already have some experience, you’d do well to look for bartending jobs at Jackson Hole’s upscale restaurants or high-volume bars, where the tabs are often bigger — and the tips are usually better. Some places in Jackson may require you to complete alcohol service training prior to employment, but the primary qualifications are going to be prior experience and solid hospitality skills. If you’re lucky enough to snag a bartending gig, you can rake in some serious money while meeting tons of new people and, most importantly, not missing out on powder mornings.

Note: Just starting out? Look for work as a server, bar-back, busser, or other front-of-house employee and then work your way up.

When you’re the person helping to keep Jackson’s iconic Aerial Tram running to the top of Rendezvous Peak, you basically have the most important job in town. Engineers and mechanics are responsible for ensuring the smooth operation of the lifts at Jackson Hole. Duties include everything from performing maintenance and repairs to helping with annual inspections and record-keeping. You may need a mechanical or electrical engineering degree and/or prior experience to fill one of these roles, but mostly you’ll need to be handy, okay with getting up super early, and ready to get a bit grimy.

Jackson Hole is one of those rare places where the resort jobs are some of the sought after, which is reflected in its 4.2-star average on Glassdoor. The company provides solid benefits, especially for year-round employees, including health insurance, lift passes, discounts, PTO, and a 401(k). While the pay for some seasonal or entry-level jobs is not stellar, there are a variety of management and administrative positions that will provide a solid income. Additionally, there are employee housing units in town for resort employees, which can significantly lower your expenses. Space is limited, though, so apply as soon as you’re eligible.

Sharing your passion for skiing and boarding is not only an amazing way to spend your days; it can actually be a profitable venture, too. As a heli-skiing guide, you’ll get to help others access backcountry terrain that’s, in many cases, completely untouched. There is a litany of requirements you’ll have to fulfill before becoming a guide, including medical certifications, emergency and rescue training, and prior instruction experience. It’ll be well worth it, though, when you’re enjoying first tracks — and, hopefully, big tips — without ever getting on a lift.

Bonus: Want to set out on your own and build a heli-skiing guiding outfit in JH? Take a look at this primer for starting a small business in a mountain town.

There’s a reason some of the best outdoor athletes in the world call Jackson Hole home. The ability to make a great living doing work you love and take advantage of 400+ inches per year of some of the best powder in the world? That’s the dream. Nab one of these jobs, and you’ll be on your way to obtaining Jackson Hole local status and an office in the shadow of the Grand Tetons.