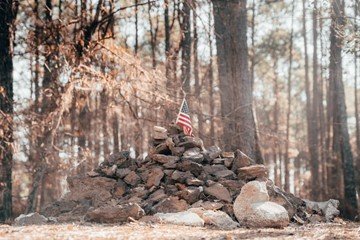 Everyone has thought of leaving the city bustle and moving to a calmer, cleaner, and healthier environment at least once in their life! The fresh air, food directly from the garden, daily contact with nature, and a slower pace of life, are all factors that make the idea of moving to the mountains appealing. Louisiana is known for many things (food being very high on that list), but we can’t say it’s famous for its buffs and cliffs. However, the highest point in the state is a great place to visit while you’re here if you’re craving a hike. To help you make that visit unforgettable, here’s all you need to know about Driskill Mountain, Louisiana.

At 535 feet above sea level, Driskill Mountain is the third-lowest high point in the United States, after Florida’s Britton Hill and Delaware’s enigmatic-sounding Ebright Azimuth. It’s located in Bienville Parish, about 5.3 miles (8.5 kilometers) southeast of Bryceland. A large mound of rocks marks the highest point.

The region is heavily wooded, which is typical of East Texas and Louisiana’s Piney Woods. As a result, major logging activities have taken place near this high point, making routes challenging to follow.

The layers in this section of Louisiana contain a lot of ferrous sandstone, which gives the soil a reddish hue. Driskill Mountain was formed by the erosion of unlithified Paleogene silt. The Cockfield Formation nonmarine quartz sands make up the peak. These sands sit on top of the Cook Mountain Formation’s shallow marine and coastal clay and silts, which form the bulk of Driskill Mountain. Wild azalea and dogwood can be seen among the mountaintop vegetation.

Charming communities like Gibsland, Castor, Arcadia, Saline, and many others are located in the Bienville Parish. It is renowned for its Bonnie and Clyde days, watermelons, and jubilees. Additionally, Bienville Parish is a hunting and fishing haven with many ponds, lakes, and forested regions ideal for weekend vacations. Forestry is the parish’s most valuable agricultural commodity, valued at more than $47 million.

If you find yourself visiting, you might end up loving it so much you want to move your life long-distance. If that happens, quickly searching for an easy and efficient way to relocate is imperative, as hiring reliable long-distance movers will significantly alleviate this task.

Driskill Mountain was named after James Christopher Driskill, born in 1817 in Henry County, Georgia. He married Eugenia Irwin Walker in 1840. Driskill sold his estate in Troup County, Georgia, in October 1859 and relocated with his wife, eight sons, and one daughter to Louisiana. He had bought 324 acres (1.31 km2) of land in Louisiana by December 1859, which included Driskill Mountain. Driskill was a member of the Home Guard during the American Civil War. On May 5, 1864, his eldest son, William B. Driskill, was killed in combat during the Battle of the Wilderness in Virginia. James B. Driskill, another one of his sons, vanished after leaving Louisiana to fight in the Civil War. In 1874, he gave two acres of his land to what is now the Mount Zion Presbyterian Church and the Driskill Memorial Cemetery. Driskill’s family remained in Bienville Parish, except for one son and daughter. His descendants still live there.

The main Driskill Mountain route starts at the Mt. Zion Presbyterian Church parking lot. However, those looking for additional vertical gain and distance can park farther south at the crossroads where Jot Em Down Rd. intersects. The peak and the route leading up to it are on private property, and the present owners encourage local hikers as long as they stay on the track and take care of nature.

Except at the very beginning, where what appears to be a route behind the cemetery is merely a clearing, the well-kept track is easy to follow. Because there are two false peaks near Driskill’s actual top, the landowners have taken substantial measures to help hikers reach their destination.

How to find Driskill Mountain

Take exit 69 for Arcadia, Louisiana, from Interstate 20. Turn left onto State Route 151 and head south. Then, continue 1.5 miles on Route 151. Make a left onto Jonesboro Rd/State Route 147. Continue 9.3 miles on Jonesboro Rd. After that, make a right onto State Route 507. Continue on this path for another 2.7 miles until you get to the First Presbyterian Church on your right. Driskill Mountain is marked with a black sign.

Driskill Mountain’s summit is a two-mile roundtrip climb up a broad gravel and dirt road. The trek leads you through dense woodland with wildflowers in season. As for hiking tips: for most hikers, the only climbing equipment needed for this journey is a pair of tennis shoes and a bottle of water. The paths come to a halt in a clearing surrounded by hardwoods, where you’ll find a summit marker and a guestbook, indicating that you’ve arrived at your goal. The guestbook contains travelers’ names, many of whom are referred to as Highpointers — hikers who have reached the highest peaks in each of the 50 states.

Weather variations don’t have a significant influence on this mountain; you can visit it all year. In the winter, temperatures seldom dip below freezing, although this region generally gets one major blizzard in late February or early March each year.

If you visit Driskill Mountain, Louisiana, make sure to respect nature and stay safe. Happy hiking!